Starting the Year with A Blast - Sinulog Festival in Kabankalan

CELEBRATING LIFE AND ITS BOUNTY!! 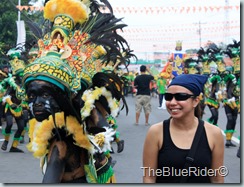 Sinulog, the Kabankalan City version of the world famous “Ati-Atihan” indulged in by our ancestors, is celebrated on the third week of Janauary that honours the child Jesus, known as the Santo Niño (Holy Child). It is a dance ritual that commemorates the people's pagan origin, and their acceptance of Christianity.
More than the noise of drums, the festival has a laudable origin. It dates back when Kabankalan was just a barangay of Ilog, the once capital of Negros Island and Siquijor. Since Ilog was navigable, it was the center of commerce and had been very progressive, to the envy of Muslim pirates who were about to conquer the place but with people gathering in Church and praying, a small Child with the shining sword atop the Church’s roof drove the pirates away. People believed that it was Sto. Niῆo, and to honor him, dances were offered first by the sacadas but because it was attractive to tourists, it has later become a festival.

Until this day, the same tradition has been carried and passed on from generations to generations. This festivity is not just for fun and merry making but most of all a way of Kabankalanon's to say "THANK YOU" for all the blessing received and to pray for a more bountiful harvest in the days, months and years to come.

The best thing about this celebration is the never ending street party and "bulinganay" where natives and tourists get the feel of the mardigras by means of painting themselves with charcoal in resemblance to the original Aetas.  Merry making surrounded the city as each tribe competes for the rituals and at the same time for the drum beating. 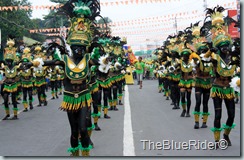 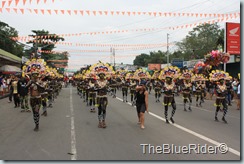 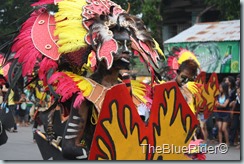 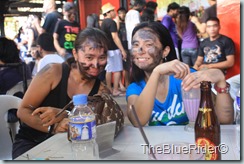