A lot of things has been said and done about this event. Since last year I've been dreaming to witness this myself. A lot of people became excited for me, there were attempts as well to discourage me not to go. I'm sorry to disappoint my detractors, i am determined to see this myself. No one will stop me even the bad weather. And yeah, the weathers isn't that good when I left Bacolod and even as soon as I landed in NAIA 3. Its raining hard that made  my travel a little inconvenient.  The moment i land my feet in NAIA, first thing comes into my mind… I NEED TO EAT, I haven't eaten a descent meal since I left Bacolod. I took a cab straight to SM Mall of Asia, should be waiting for a friend there for lunch but he wasn't able to make it. Dropped by luggage first and I went to Greenwich to eat, then went straight to Krispy Kreme (the love of my life) lol. So now I'm satisfied, with full stomach and a little sleepy head. I think I'm just too tired waiting for nothing, so i took my bag, took a cab again and then went straight to Victory Liner Terminal. This will take me to Pampanga.  I took a Dagupan bound bus, according to the info official this will drop me to DAU terminal. After roughly 3 hours of travelling i reached DAU bus terminal in Mabalacat Pampanga. I'm not into sleeping during  bus rides, but because I'm just too tired to resist, I slept during the ride but I'm glad my traveling instinct helped me and I woke up just in time when we enter Pampanga.
The rain stopped as soon as we arrive in DAU Terminal, I took a tricycle to take me to my reserved accommodation in Josefa E Valdez, accross the Bayanihan Park, very close to SM City Clark.  I'm a bit surprised because the fare is very expensive. I paid P120.00 for a 20 minutes tricycle ride and we were just going back and forth, darn!  I arrived 630 in the evening at Red Tulip Hotel (thumbs up for this superb accommodation not in terms of facilities but because of the warm welcome from people, talking about great customer service).  I paid Php 900.00 which is actually good for 2 pax and according to the receptionist, the room can accommodate up to 4 pax, you can add an extra bed but if your good with just one bed, they wont charge you for anything.

Here are some of the snapshots i took during my stay.

The rooms were located on the second floor of the building as the ground floor occupies the restaurant and the receiving area. I got Room #6, AC with a queen size bed, a private toilet and bath with heater, and a Television. The furnitures and fixture of the room as you can see were all made of rattan to get a native feel :) 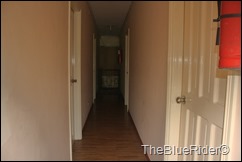 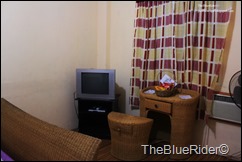 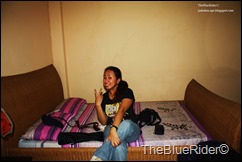 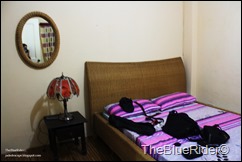 The bathroom is clean with all the toiletries needed for your stay :) I am a backpacker which makes me ready in times like this but I am just grateful I got one accommodation that fits my budget and at the same time I'm getting a great service from the staff to the owner to the room itself. 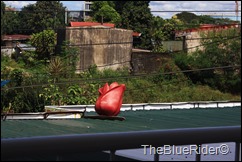 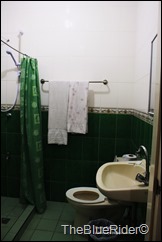 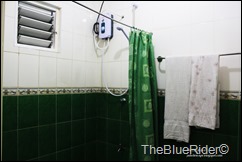 I secured my things, freshen up and I went straight to SM Clark to grab a bite, Im just soo hungry and I cant sleep in that state.  There were 3 types of public transportation you can use while roaming Clark: Tricycle, Taxi and Jeepney.  I suggest you get familiarized with the route inside cark as the Jeepney fare is way way cheaper than the tricycle and Taxi.
Oh, by the way, there taxi is not the usual taxi that we see, they don't have names in the car body,  i saw gray colored ones, at a glance they will look like private vehicles but when you get closer to them, their is a distinction on their plate numbers. The usual private plate numbers have white and green colored plate but the taxi in Clark has 3 colors in it. Green, Yellow and White.
As I knew, Pampanga is best known for Sisig, so I tried one myself at Aling Lucing.  Not that bad for a Sisig but i think our Sisig in Bacolod especially the ones in Kubo sa Lawn can beat what Pampanga has to offer.  Its just past 8pm when i finished having dinner so I decided to roam around SM Clark, its just small so you wont really get tired. As I am walking, I couldn't help but noticed, as far as my observation will tell me, 70-75% of the people i came across here in Clark were foreigners, and I guess that justifies why the fare is so expensive. I hope their government officials can take a look at the effect of this to the locals.  We (locals) also have money but not as powerful as the ones from the outside, the purchasing power of of their currency is way too high.

I got tired, wanted to call it day at exactly 930 pm i dozed off. Long day tomorrow and i have to wake up really early to get a good post for the Hot Air Fest. That's the main reason why I'm  in Clark so I should be prepared more than anything else.

At exactly 3 AM I woke up, prep myself and at 4 am, i found myself walking on Clark Pampanga Streets, asking directions how to get to the Hot Air Site which is in Omni Aviation.  I took a jeepney from SM City Clark Terminal paid Php7.00 this will take me to the main gate.  Good thing most of the people riding the same vehicle have the same route so I can pretend i know where to go by just following them (LOL). after a 10 minute jeepney ride we arrived at the Clark Freeport Main gate and yeah, we have to walk roughly 100 m to  get to the entrance of Omni Aviation. When we arrived the gates were closed so we waited for more than 20 minutes to get in. Another 15 minutes walk to get to the Flying Site. As soon as I arrive, I looked for a good post, near the middle part of the field so I get to see both the left and right runway to get better view of what's happening from both sides.  I stayed inside the Omni Avaiation until 10 AM. I decided to go home because i cant stand the scourging heat of the sun. Anyway i was able to witness the highlight of the said event. The Inflation of the Ballons, the Hot Air Balloon Flying Competition, the Plane and paragliding exhibitions and the highlight which is the Breitling Jet exhibitions.