The art of ancient Greece has exercised an enormous influence on the culture of many countries from ancient times until the present, particularly in the areas of sculpture and architecture. Greek life was dominated by religion and so it is not surprising that the temples of ancient Greece were the biggest and most beautiful.They also had a political purpose as they were often built to celebrate civic power and pride, or offer thanksgiving to the patron deity of a city for success in war. 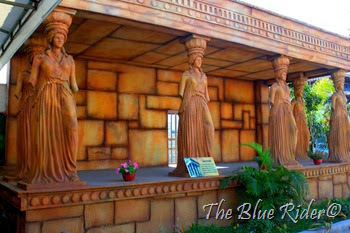 It is an ancient Greek Temple on the north side of a Acropolis of Athens in Greece which was dedicated to both Athena and Poseidon. The caryatids – six draped female figures is called the “Porch of the Maidens” 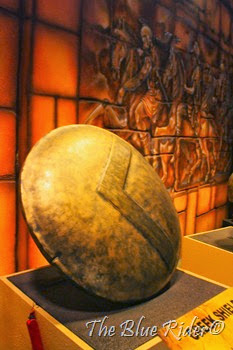 It is a large, deeply concave, circular covering made of wood and bronze. The Greek shield is effective covering when being attacked 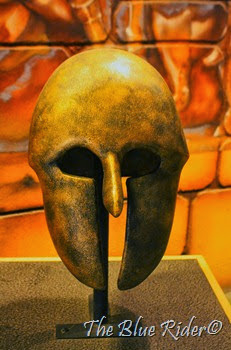 It took its name from the city-state of Corinth. It was a helmet made of bronze which in its later styles covered the entire head and neck, with slits for the eyes and mouth. A large curved projection protected the nape of the neck. It also protected the cheek bones, which Greeks adored 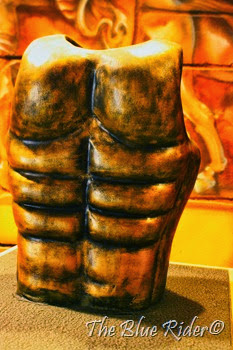 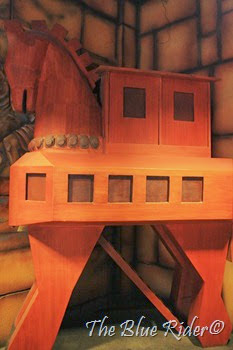 The Trojan Horse came from the tale about the Trojan War when the Greeks entered the city by hiding inside the wooden Trojan Horse. The Greeks pretended to sail away and the Trojans pulled the horse into their city as a victory trophy not knowing that Greek soldiers were inside to defeat them 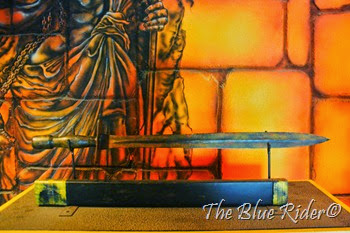 It was introduced around 800-400 BCE, leaf-shaped blade effective for slashing and stabbing. The ancient Greeks regarded the sword as strictly a back-up weapon, one that would never replace their battle-proven reliance on the spear 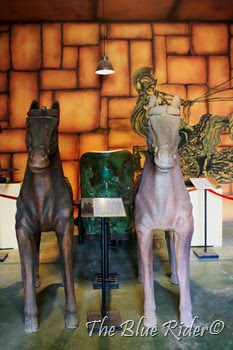 It was a fast, light, open, two-wheeled conveyance drawn by two or more horses  that were hitched side by side. Chariots were used for war and mobile archery platforms, as well as more peaceable pursuits such as hunting or racing for sport, and as chief vehicle of many ancient race, when speed of travel was denied rather than how much weight could be carried 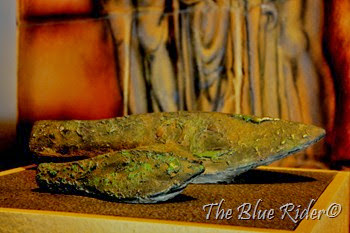 It is a tip, usually sharpened, added to an arrow to make it more deadly or to fulfill some special purpose. The earliest arrowheads were made of stone and of organic materials; as human civilization progressed other materials were used like bronze 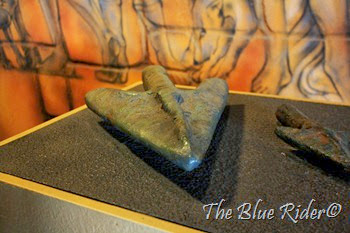 The Scythians were masters of both horse and archery deadly with their small compound bows firing arrows form horseback tipped with arrowheads. The small profile of this arrowhead made it highly accurate when fired from a moving horse as it was not as susceptible to crosswinds compared to broader-shaped projectiles 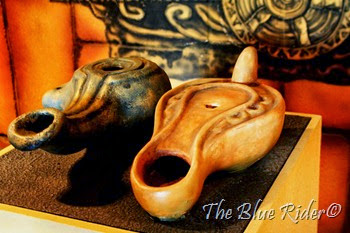 It is used in ancient Greece for about 300 BCE to 200 CE. The earliest Greek lamps were wheel made. It is used for rituals and ceremonies. It is a symbol of connection to sacredness 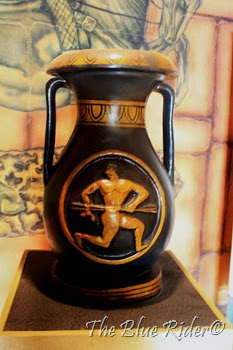 Pottery was important to the ancient Greeks for storage. Everything from wheat to wine was stored in pottery. Pottery was made by shaping clay on a wheel, decorating  the pot, and then heating the clay in a kiln. In early Greece, (1000 to 700 BC), pots were decorated with geometric designs 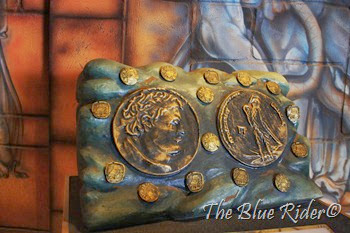 The Ancient Greeks were among the first people in the world to use coinage system starting in the 7th century BCE. The central denomination of this coinage system was the drachm, meaning "a handful"

Greek mythology consists of stories belonging to the ancient Greeks concerning their gods and heroes, the nature of the world and the origins and significance of their religious practices. The Greeks invented athletic contests and held them in honor of their gods. They also started the famous Olympic games which has been tested through times. 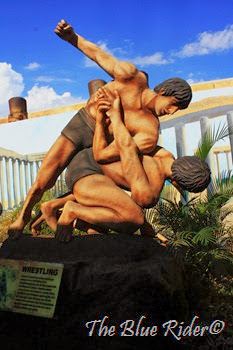 It is a from of combat sport involving grappling type techniques such as clinch fighting, throws and takedowns, joint locks, pins and other grappling holds. A wrestling bout is a physical competition, between two (occasionally more) competitors or sparring partners, who attempt to gain and maintain a superior position. There are wide range of styles with varying rules with both traditional historic and modern styles. Wrestling techniques have been incorporated into other martial arts as well as military hand-to-hand combat systems. 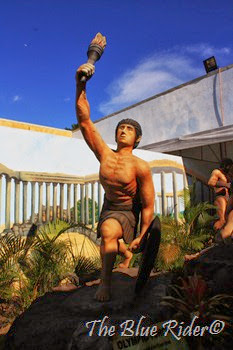 The Olympic flame is a symbol of the Olympic Games. Commemorating the theft of fire from the Greek god Zeus by Prometheus, its origins lie in ancient Greece, where a fire was kept burning throughout the celebration of the ancient Olympics. 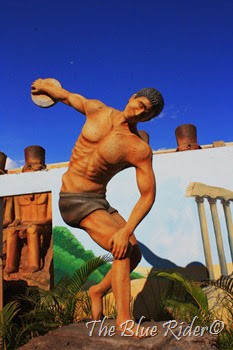 The Diskobolus of Myron, the Discus thrower is depicted about to release his throw, is a Greek sculpture that was completed towards the end of the Severe period, circa 460-450 BCE 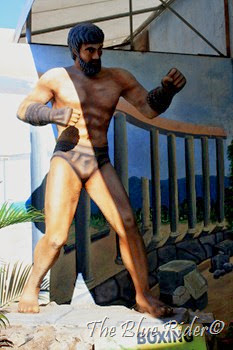 It is a combat sport in which two people engage in a contest of strength, speed, reflexes, endurance, and will by throwing punches with gloved hands against another opponent. The birth hour of boxing as a sport started with ancient Greeks as an Olympic game.

Greek mythology consists of stories belonging to the ancient Greeks concerning their gods and heroes, the nature of the world and the origins and significance of their religious practices. 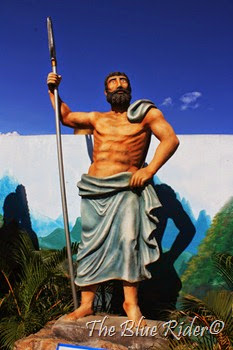 He is the great Olympian god of the sea, rivers, flood and drought, earthquakes, and horses. He was depicted as a mature man of study build with a dark beard and holding a trident. 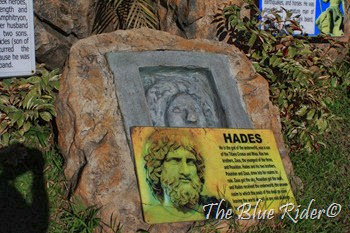 He is the god of the underworld, was a son of the Titans Cronus and Rhea. Has two brothers, Zeus, the youngest of the three and Poseidon. Hades and his two brothers, Poseidon and Zeus, drew lots for realms to rule. Zeus got the sky, Poseidon got the seas and Hades received the underworld, the unseen realm to which the souls of the dead go upon leaving the world as well as any and all things beneath the earth 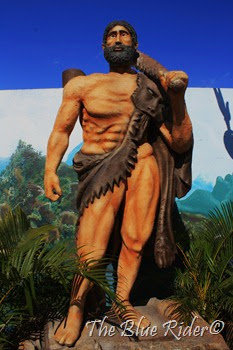 He is the most popular of all Greek heroes, famous for extraordinary strength and courage. Alcmene, wife of Amphitryon, made love to both Zeus and her husband on the same night and bore two sons. Hercules (son of Zeus) and Iphilicles (son of Amphitryon). Hercules incurred the everlasting wrath of Hera because he was the child of her unfaithful husband 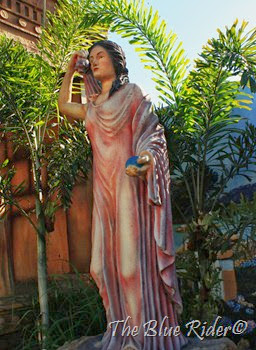 She was the great Olympian goddess of beauty , love, pleasure and procreation. She was depicted as a beautiful woman usually accompanied by the winged Eros (Love) 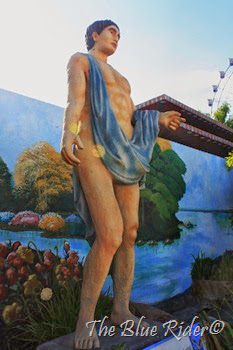 He is a great Olympian God of animal husbandry, roads, travel, hospitality, heralds, diplomacy, trade, thievery, language, writing, persuasion, cunning wiles, athletic contest, gymnasiums, astronomy, and astrology. He was also the personal agent and herald of Zeus,m the king of the gods

These are just  portion of what Greece have contributed to the world and have influenced our modern world in many ways. Most of the infrastructures nowadays are still designed with tradition in mind. The sport stadiums built in Greece for their Olympics are much like our own present day stadiums. Also, we have incorporated statues on our modern architectures.