A Place of Peace and Power : Candi Borobudur

My second day in this artistic city aims to see the Magnificent structure of Candi Borobudur. Borobudur was derived from an expression which means 'Mountain of accumulation of merits of the ten states of Bodhisattva' and commonly thought of as a Buddhist structure yet its initial construction was planned and conducted by Hindu builders sometimes around 775 AD.
From Malioboro, I catch a bus going to Jombor Terminal (Trans Jogja) and then transferred to another bus going to Borobudur. The travel will take at least one hour. Once you reached Borobudur Terminal, the temple is a few minutes walk. Since I already got a combo Ticket, I proceed to the entrance. By the way, entrance gate for locals is different from foreigners.  The rates paid by foreigners were obviously high, but along with that price, you’ll get a bottled water and a little introduction before you start your way up to the temple. Guides are also available for a fee. I even got the chance to talk to one guide and she’s a fan of “Pangako Sayo” with of course Jericho Rosales as the leading man.
The Borobudur stupa is massive, symmetrical monument, 200 square meters in size, sitting upon a low sculptured hill.  The monument represents a Buddhist cosmological model of the universe organized around the axis of mythical Mt. Meru.  It’s steep and it’s massive, it’s just magnificent.
Starting at the eastern gateway, pilgrims circumambulate the stupa, always in a clockwise direction. Walking through nearly five kilometers of open air corridors while ascending through six square terraces and three circular ones, the pilgrim symbolically spirals upward from the everyday world to the nirvanic state of absolute nothingness. 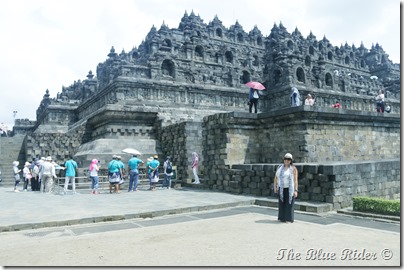 The first six terraces are filled with richly decorated relief panels in which the sculptors have carved a textbook of Buddhist doctrines and a fascinating panorama of 9th century Javanese life. Upon the upper three terraces are 72 small stupas, each containing a statue of the Buddha (these statues are usually headless; relic hunters stole many of the heads, others are in museums). Crowning the entire structure is a great central stupa. Representing Nirvana, it is empty.
Each of level of the carved bas-relief panels and sculptures depicting the life story of the Buddha, his teaching and path towards enlightenment.  All together, there are 2,760 reliefs recounting the fours key stories: The Law of Karma, The Birth of Buddha, The Stories of Buddha’s previous life and the journeys of Sudhana search for the Ultimate Truth.
The cross legged Buddha statues seated in the lotus position appear on the square platforms and the top level. They are almost identical, except for the position of their hands, which represent the 5 cardinal compass points according to Mahayana Buddhism.
Visiting this beautiful structure is definitely a tick out of my bucket list. I have always been fond of cultures and heritage plus architecture. Candi Borobudur is one of the most beautiful and intricately designed temple I’ve been to. It was worth the long walk and hot summer heat. It’s definitely a ‘must-see’ when you are in Yogyakarta.
Exiting the temple grounds,  I had to fill in my empty stomach so I dropped by the nearest local restaurant.  Across the eatery, there’s a becak waiting for tourists who wanted to explore some more spots within Borobudur.  I got one to take me to Mendut and Pawon temples.
Just some few meters away from the main entrance of Borobudur is Candi Pawon.  It’s also a Buddhist temple that served as the purifying temple before people ascent to Borobudur.  Pawon literally means “kitchen” in Javanese language, which came from the root word awu or dust.  The connection to the word “dust” also suggests that this temple was probably built as a tomb or mortuary temple for a king. 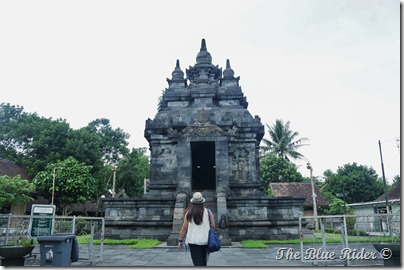 Next stop is Mendut Temple which located few kms away from Borobudur. It is rectangular in shape with multistoried roofs decorated by small stupas. Unlike Borobudur Temple that’s facing the sun, Mendut temple faces westward.  From a distant, the temple looks graceful and sturdy but when you walk around the foot, you will see relief panels.
It’s believed that pilgrims in those days who traveled to see the wonders of Borobudur would follow a straight line in this area called the Kedu plains, arriving first at Candi Mendut; then to the next temple, Candi Pawon; and finally reaching Borobudur.   Had I known this prior to heading to Borobudur, I could have followed the same path.  Needless to say, these temples may not be as massive as they look played a significant part in the Hindu’s beliefs and cultures.

I had enough beauty for the day, time to travel back to the city. I took the same route and rested for a while.  I called it a night with their best selling beer in town.
Goodnight, Jogja!