After that adrenaline pumping activity we had at Baidan, the six of us head north to Moalboal, Cebu. We will spend the night here and experience its wonders the next day. We booked at a Santornini-inspired contemporary resort: Pescadores Seaview Suites. Our first sight of Moalboal is to explore the greatness of Pescador Island which can be seen across from the infinity pool of the resort. 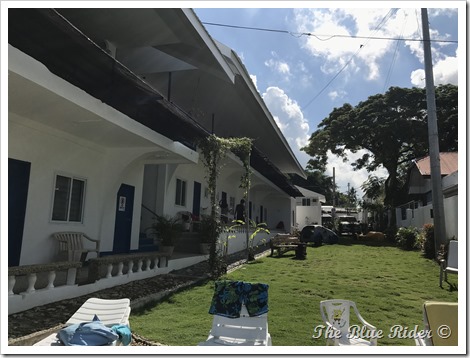 We booked the Pescadores Island tour via the resort as they present a reasonable rate as well. Since we are a group of six, we're given a medium sized boat at Php 2,000.00. Rate starts at Php 1,500.00 for a max of 5 persons.  The tour includes snorkeling in Pescador island, the Moalboal Sardines run and Pawikan chasing (coz you will literally chase them)
It's our third day and it started very early. We hop on the boat as early as six in the morning. According to the resort staff, that's the ideal time to start because we may even see a dolphin if luck is on our side. But nah, they're shy, I guess when we went there. 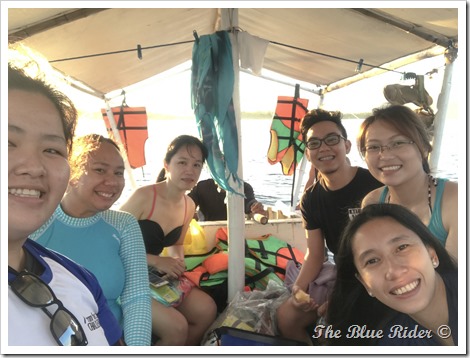 Destination #1: Pescador Island  - Sardine Run – Pawikan Chasing
After 30 minutes we arrived at the famed island. Pescador is named because of the may fisherman that visits the place and always returns a bountiful harvest. In Spanish, Pescador means “fishermen.” The rich marine diversity of this island makes it a very popular site for divers here and worldwide.
After our boatmen found a nice spot to tie the boat to a floating buoy since dropping of anchor is not allowed because it damages the reef, we put on our gears and started to jump off the water.  The water current is strong that day so it makes it a challenge to get back to the boat.
It’s a different story when you start to see the conditions under. The water looks calm and steady, ironic! The photos I captured isn’t enough to describe the wonders of Pescador Island underwater.  It’s full of life.  The beautiful corals served as the home of thousands of fishes.  In fact, a large percentage of the country’s more than 2,500 species of fishes can be found here. 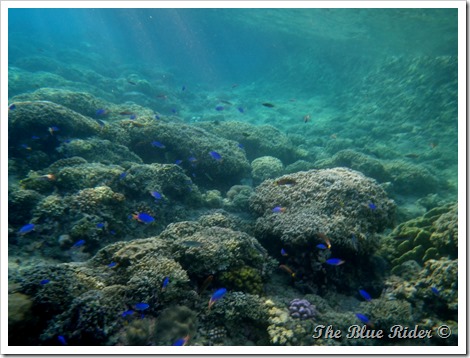 Even for non –divers, one can still enjoy the underwater beauty of the island because even at shallow waters you will be able to see beautiful corals and abundant fishes. It’s blue, it’s breathtaking.
The boat engine started to roar and we then transferred to the next destination. Few minutes of cruising we stopped, the boat engine died and little did I realized that we're already on our next stop,. We looked at each other with questions and at the same time anticipation. When our boatman finally spoke "Andito na po tayo!" Much to our delight, we were surrounded by a huge, huge school of sardines. Probably millions of them.  At first we didn't know what to do when all of a sudden thousands of fishes came out of the water. I think someone from the other boat throw something. And when I got the chance to finally dive into the water, the most majestic sight unfolds in front of me.  This extraordinary phenomenon is called a sardine run, and it has been one of my most ardent wish to see one.
No one knows what causes  a sardine run; the phenomenon is still poorly understood up to this day from an ecological point of view.
It was like being surrounded by a living wall. I could only do wishful thinking:  I wish I know how to free dive, I wish I can sink and stay longer under the water (yeah, probably soon) 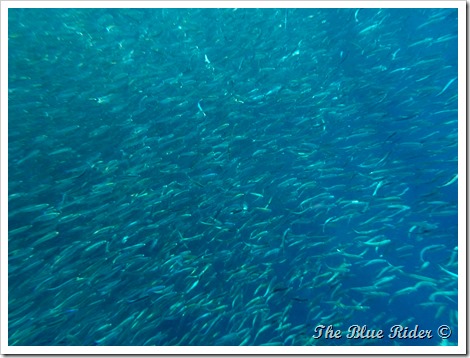 There are literally hundreds of thousands fishes in here. I didn't recognized it at first but when you swim towards them they started to move. It felt terrifying at first because they can literally outgrow your size (as if they are transforming) The only thing that really suck is the jellyfish and they really sting as hell and very itchy. Nevertheless, that experience was truly awesome.
Compared to Pescador Island, this place is literally full of corals but less fishes. I think I was too tired from the all the swimming, I did not want t chase the Pawikan anymore. Monica and one of our guide tried their luck and chase it in the open water.
We finished that day with a refreshing swim at the resort’s infinity pool. We then started to pack our stuff to hit the road for another destination.  If you are into diving or snorkeling, then this place is definitely a must visit. 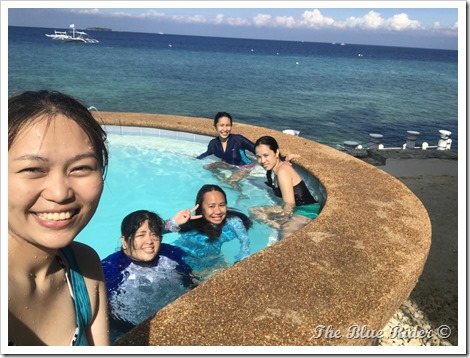 For those that will be coming from Cebu, Moalboal can be reached by bus from the South Bus Terminal.  Take the bus bound for Moalboal via Barili or Badian.  The bus will drop you off at the bus stop. Once you are in Moalboal town, you can take a tricycle going to the resort. 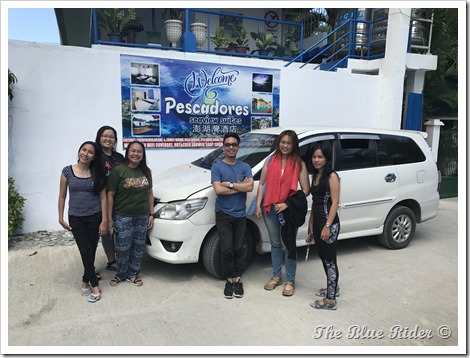 Destination #2: A Visit to the Beautiful Simala Shrine

After having breakfast, we left Moalboal at around 10 o’clock in the morning and headed to Simala Church – it’s a Sunday  We took the faster route but literally took the road less travelled as we passed by unknown roads (no public vehicles passing). I was just driving but there are lots of things coming to my mind.  What if the car breaks down, who’s going to rescue us?  After several twists and turns, we finally reached the Miraculous Shrine of Simala.

Monastery of the Holy Eucharist, popularly known as Simala Shrine or Simala Church, is a castle-like church located in Marian Hills of upper Lindogon, Simala, Sibonga, Cebu. Simala Shrine was built in 1998 by the Marian Monks from Pampanga, after the occurrence of several miraculous events, including that of Mama Mary's shedding of tears. Because of the said miracles, Simala Shrine became so popular that devotees and believers flock the shrine, hoping and believing that their prayer requests would be granted. The shrine's castle-like and picturesque structure makes it even more popular, drawing local and foreign tourists, alike. 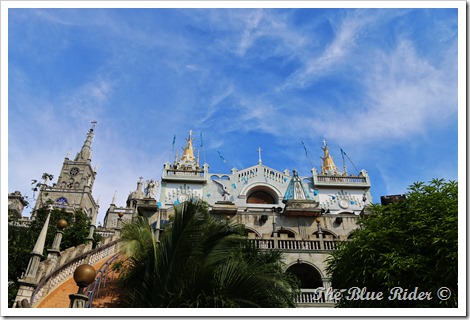 This was my second time visiting this place, the first one was last May 2015 when the castle structure is still under construction.  While some view the shrine as an ostentatious representation of a simple and humble life, its awe-inspiring structure and architecture is part of the draw.  It has towers and spirals that can rival churches found in Europe and structures and minarets of Western Asia More than just taking pictures, people from all walks of life visit Simala Church to pray and raise their intercessions to Mama Mary. The interiors of the church will give you solemnity and divine atmosphere.  It will also provide you an insight of the people’s level of devotion to the Miraculous Virgin Mother through the many letters from people whose lives have changed, wishes have been granted, and prayers that have yet to be answered. Truly an otherworldly experience for many. 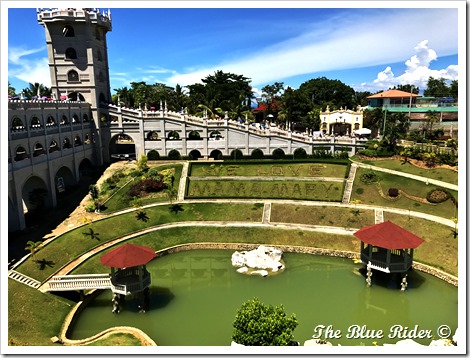 The church improved a lot since the last time I visited. 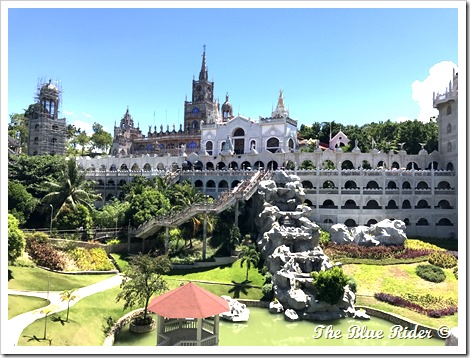 Not exactly a believer? Visiting the Shrine would still prove worthy of your time and effort. It will give you a different experience–one that is pleasing to your senses. Besides, if you haven’t been to the Simala Shrine, then you haven’t experienced all of the south side of Cebu yet.

Getting there by private vehicle is the most convenient option, like ours.

But didn’t they say that part of an adventure is taking public transportation? The good news is the commute is short and steep. Take a bus going to Sibonga at the Cebu South Bus Terminal. Just tell the driver you want to get off at the Simala Church.  From the drop-off point, take a habal-habal or motorcycle ride to reach the Simala Church. Be ready for a steep climb.

Alternatively, you can take a V-Hire from the GT Express Terminal. Some vans take you to the church itself.

The entire trip can lasts 3 hours or less. 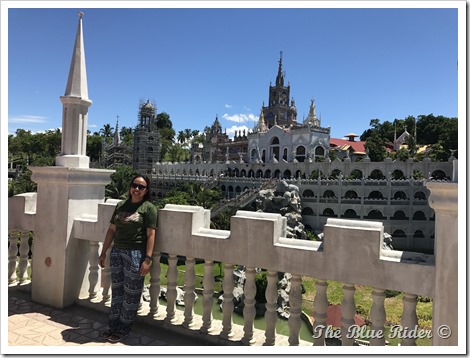 We started traversing the road down south from Sibonga to Dalaguete. It was past two o’clock in the afternoon when we started hitting the road. Little did I realized that the road leading to Osmeña Peak is very steep. We had to return back to Dalaguete to check the tires as it felt a little bumpy while we are reaching higher altitude. After checking, we decide to stop over for a quick lunch. This is it, no more turning, back.  After how many hopes and wishes, finally I have conquered Cebu’s highest peak – Osmeña Peak. Hurray! 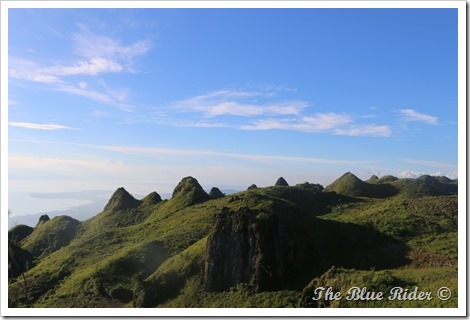 Back then, whenever I see posts of people going on hikes  and treks, I would usually say, “When will I be able to reach its top?” And I am just happy that I finally made it. I, originally wanted to witness the sunset but with the kind of road I will be conquering, nah, no more sunset dreams. 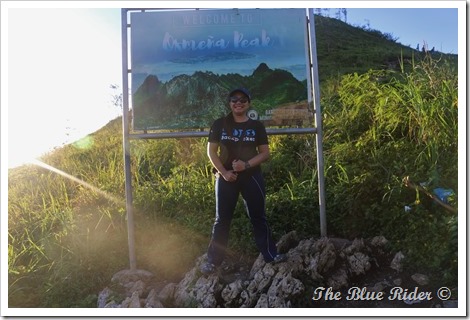 I’ve read that the trail is fairly easy and with regular pace, you will be able to reach it in 30 minutes.  But hell yeah, for someone who haven’t trekked for few months, it made me catch my breath. 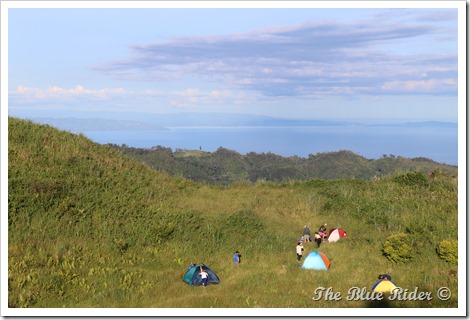 Before you can start the official climb, you need to register first.  You also have the option to hire a guide for a fee. I highly recommend you get a guide even if the trail is visible as this help the locals.

Even if the trail is easy, I would say it will still require you to rest once in a while because of the uphill climb.  One needs to be careful as well to avoid slipping. 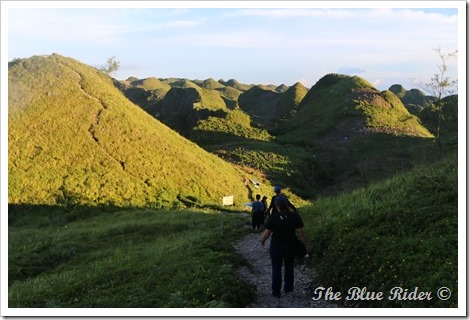 Osmeña Peak is standing tall at 1,013 meters above seal level. Though not as high as the other mountains I’ve been to, the view still amazing from the top. We were blessed with a clear blue sky and a beautiful setting sun. Giving us a clear view of Badian, Tañon Strait and the province of Negros Oriental. 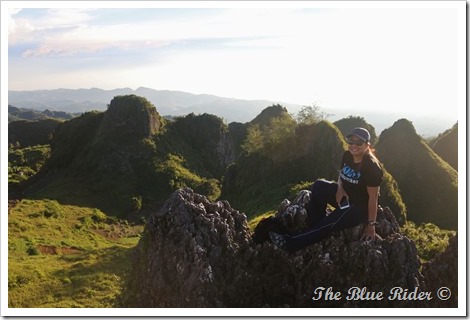 We stayed at the peak for half an hour and took as many photos as we can. There are lots of hikers as well when we went there making it a challenge to get a decent photo.